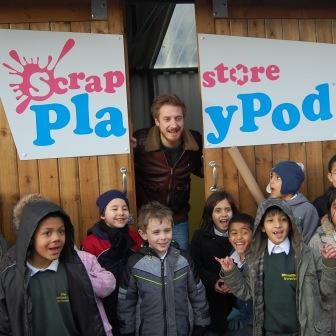 This filming opportunity was set up by Spirit to mark the arrival of the 50th PlayPod in the region and was also covered by local radio and newspapers.

To support the expansion of Scrapstore PlayPods across the country, we publicised the arrival of the first PlayPod in the West Midlands, gaining coverage in several Birmingham and West Midlands newspapers including the widely read Wolverhampton Express & Star.

This was thanks in part to the support of Dr Who star Arthur Darvill, aka Roary, who has just become a patron for the Children’s Scrapstore and enjoyed a ‘PlayPod lunchtime’ at a Walsall infant school.